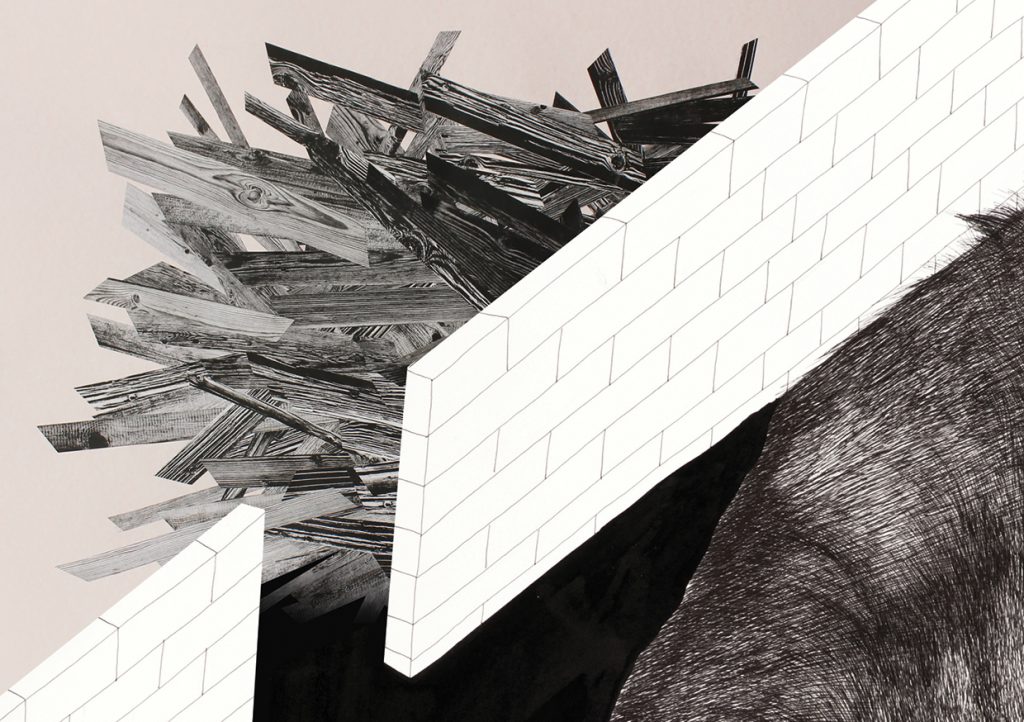 Loft 8 presents the joint exhibition Liquid Borders of Mária Čorejová (SK) and Lucie Mičíková (CZ). The title of the exhibition refers first of all to the current permeability of European nation-state borders, which enables collaboration of artists from neighboring countries in Vienna. Furthermore and more importantly, it refers to the method of their work in various media and to the impression of a certain fluidness and variability concerning their artworks. The common denominators of the projects of Mária Čorejová and Lucie Mičíková are the interest in architecture (spatial, structural or symbolic), poetic qualities of their works, frequent collaboration with fellow artists and their engagement with the medium of drawing.

The drawings of Mária Čorejová are typical of their black-and-white rendering. Using ink on paper, she inscribes critical content, enhanced by the titles of her drawing series, to the entangled shapes and lines of the particular objects and spaces. Over the years, Čorejová created her own „iconography“, a number of symbolic objects and spaces such as balloon, pool, church and others, which she skillfully plays with and thereby plays out the possibilities of interpretation. The objects in her drawings flow, drown, fly or burn, disobeying the rules of physics, but still retaining a strange equilibrium present in the picture.
Although she studied intermedia, Lucie Mičíková often returns to the „classical“ medium of drawing – to extend its field of possibilities. In the exhibited series of wooden structures, she was inspired by the Japanese technique of siding shou-sugi-ban. This traditional technique is based on decorating the exterior of works of architecture with intentionally charred wooden slabs. She redraws the beauty of these structures with carbon, highlighted by a seemingly destructive process of burning and brings them into the interior. She adjusts them not as pieces of paper into the frame, but rather installs them as objects in the space, providing them with new qualities. By turning the outside in, she questions the dualistic perception of inside – outside. Similarly, the enigmatic flow of undefined black fluid in Čorejová’s pictures bears the impression of a photographic negative more than of a positive picture, where all borders simply melted.